Here, the garden has only thrived for the very heat loving and heat tolerant – gardeners included. The months between May and August blur together with very little to distinguish them, in the south. Heat, excessive heat, and very few rain days make the summer season string on forever and ever. And that was everso the case this year. Midway through August, we are celebrating our second rainstorm since early May, and the break in thirty plus 100 degree days. (We celebrated with “Thundercake” by Patricia Polacco; see more here!) That being said, July will be remembered by the inability to weed the garden or harvest cucumbers simply because of the size of my pregnant stomach. But August is here, and the heat and the stomach have begun to subside. Here’s what’s left behind:

Our front garden had a burst of fervor in early summer with surprise perennials leaping in growth and multiplying throughout the space. Yarrow sprouted and bloomed, additional gomphrena survived the transplant, and an echinacea abandoned, (note: I placed on top of where it was planted) flourished. I trimmed back baskets of oregano, cilantro, thyme, mint, sage, and basil to dry and store. My singular huckleberry plant educated me on how LARGE they actually grow, and in future would do much better in the ground rather than a pot. My three yellow rose bushes gave wave after wave of beautifully scented flowers. Zinnias fed bee and hummingbird, and glass jars for friends.

Then the heat and third trimester with a toddler came. All the herbs became leggy, and flowered. The yarrow retreated. The marigold fried. The bean tower came down in early July. While things did not totally fry, thanks to daily watering, the space is leggy and lackluster. Not a veggie in sight.

Our four plot vegetable garden came and went in waves. I was beyond excited to see how well pumpkins, squash and gourds grew in the heat. Large green leaves, long trails of vines, abundant flowers attracting hoards of bees. But, the vine borers found them…

Cucumbers planted in May, post peas, have absolutely flourished. Aside from cherry tomatoes, these have been our most abundant and productive vegetable midsummer. With daily drip watering, the heat became a nonfactor. We harvested more banana peppers than I knew what to do with, and our hot peppers are just now beginning to load. Okra would be small in the morning and too big to eat come evening.

Losses in the garden

This was NOT the year for Roma tomatoes or green beans, both I was hoping to have in surplus. We have yet to identify a particular issue. There were healthy plants setting flowers. Universally, it appears to be an off year…

We were so grateful to see growth in these gardens. It is often difficult to have the perspective of time – that these gardens are very new and the land is adjusting. The potager was entirely rye grass just two summers ago, and only five yards of dirt support the vegetable garden above the claggy clay. Things will become abundant, in time.

How to treat vine borers

Note – we did apply a spray of Thuricide BT at the base of each plant and along the vine where the damage was visible. We also sliced open the vines and killed each borer that we could find. Then, we would leave this line of drip off for a day to prevent the spray from washing away. After three applications across 6 days, we did not notice additional damage and saw continued growth from these plants! Then we had our baby, abandoned the cause and harvested what we could – four delicata squash, 8 baby butternut squash and three pumpkin pie pumpkins. Call it future baby food.

This is our ultimate goal for these spaces: abundance. Enough to eat fresh, and more to can. Still, even more to share with those around us. Abundance to create with and to sell, to reinvest in the space.

Change produces progress! Here’s what we plan to change in 2023:

Here are our top five most abundant crops from this year:

Here are five new crops we plan to add next year:

Summer is now well behind us and the seedlings for fall have sprouted. Send us a note and let us know your wins and losses in the summer garden! For what we are planting this fall, read on HERE. 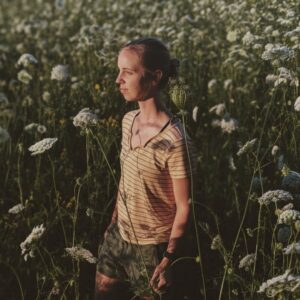 Thanks for stopping in! I’m Shannon, a first time mom on the move between the garden and the kitchen with toddler in tow. Here, we believe that there’s always something to celebrate, a mess to be made and something to learn along the way – and what comes from your “wooden spoons” is always best. Stick around for seasonal and homemade things to try! To read more, click here.